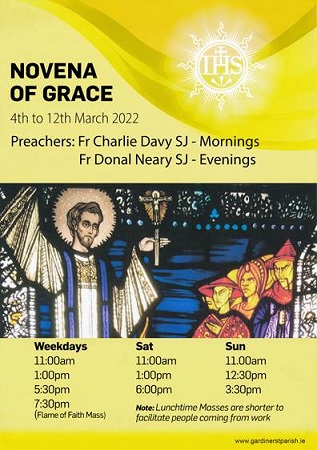 How to join the Novena:

The typically Jesuit Novena of Grace, begun in 1643 by an Italian devotee of St Francis Xavier, still draws crowds in many Dublin parishes from 4th to 12th March. The Novena of Grace originated in Naples, Italy in 1643. A Jesuit was cured through the intercession of St Francis Xavier, who promised that those who made the nine days of prayer in preparation for the anniversary of the canonisation of the saint would receive many graces and favours. Thus the name, Novena of Grace. It was first held in Dublin in 1712, in the church at Mary’s Lane, now in Halston St parish. Since then it has been held continuously in Dublin and began in Gardiner St church in 1832. Read below for a fuller account of this great tradition.

An often-quoted memory of centre-city Dublin people is the time when the novena of Grace stopped the traffic. Crowds would come early for the devotions in honour of St Francis Xavier from March 4th – 12th each year. The overflow would block traffic on Gardiner St. The church seating about 900 would be filled, as would the small Ignatian chapel in the building, the corridors and the novena would be relayed to the old St Francis Xavier Hall. Crowds still come to the three sessions in the church, and to the novena which is now held in about twenty Dublin churches. A search on the web gives over 7700 sites mentioning it. People say things like, ‘St Francis Xavier never let me down’. They come to hear some good homilies, to take part in the prayer before the Mass, to pray for their intentions, as a sort of a Lenten retreat, to join in a community of faith for the nine days. People have been coming for forty, fifty or even sixty years, linking into the faith of their childhood and of their parents and grandparents who always made the novena. They come because they know they will like it, enjoy it and deepen their faith with like-minded people.

This novena originated in Naples, Italy in 1643, when a Jesuit, Matteo Mastrilli, was cured through the intercession of St Francis Xavier, who promised that those who made the nine days of prayer in preparation for the anniversary of his canonisation would receive many graces and favours. Thus the name, Novena of Grace. It was first held in Dublin in 1712, in the church at Mary’s Lane, now in Halston St parish, and began in Gardiner St church in 1832, the year the church was built.

It is simply nine days of prayer, bringing intentions to the Lord and opening ourselves to his grace. Its special focus is on the following of Jesus in the life of St Francis Xavier, listening to the word of God in the Eucharist and following responses to it in the homily. In Gardiner St there are three sessions each day. Some churches have one or two. It is a quiet, devotional novena. It is not a parish mission, and its essentials are to come to Mass and pray the novena prayer. Basic themes of the christian life are the subject of the homily each night, with reference to the life of St Francis Xavier. At each session there is the novena prayer, where we bring our intention for the novena to God. Why do that?

We come in trust to God that God is interested in our life and in our needs, and in the sadness and sorrow of life. Many intentions are for loved ones – that sons and daughters may come back to practice of faith, that someone may give up drink, drugs or crime. That someone might give up an affair, or find work. People pray for jobs for themselves and for the family. For cures from depression and illness, that family conflicts may be resolved and that loved ones may find peace in life. The petitions cover most human needs and hopes. The novena brings the ordinary yet deep cares of life to God, based on the faith that God does care for our lives and is concerned for us and with what concerns us. The novena is centered on the liturgy of the Mass, is rooted in the bible in its readings and homilies on the Scriptures; it is focused on Jesus Christ whom Francis Xavier loved and served, and is a popular and communal renewal of people’s faith in people.

Is it old-fashioned? Yes and no. Its tradition is long, some of the hymns are the old favorites, while others are more up to date. The language of the prayer can vary whether the more traditional prayer is used or the modern version. It is traditional in format and contemporary in the message of its inputs. Each Mass in our church ends with a short guided prayer. This prayer with the red lights on the altar at the painting of Xavier in Japan is a popular part of the evening. The novena presents no magical formula. In good gospel tradition it hears the words of Jesus, ‘ask and you shall receive’, and we ask, knowing that God always gives something through prayer. People say sometimes they have received a particular intention, and this is part of why people come. Other times they get something different - nobody goes away disappointed from God.

I have given the novena now for about twenty years in many places. It is a time for me of deepening my faith in being influenced by the faith of people. It is nine days of living in the fragrance of God and the faith of others, as people give time and space to God in the cares of their lives. It is a devotional time focused on growing in love of God and Jesus for the preacher and the choirs and the ministers as well as those who attend. The traffic is no longer diverted, but lives are diverted towards God and others. The novena of grace can divert our lives to open ourselves to God’s love and to his call, as seen in the life of Xavier and in the lives of those who make the novena. In introducing us each year to Xavier, we allow his life introduce us to new and refreshing aspects of Jesus Christ, and to discover anew the challenges and love of his gospel in a new century. Come and see, come and hear and find the Lord Jesus close to you as you give time and space to him over nine days.